I deleted my Facebook and MySpace pages two weeks ago. I did this for a variety of reasons, one being that a few mentally-ill acquaintances from my past had tracked me down. While the underlying reasons for deleting the accounts had been percolating for some time, it was essentially an impulsive act.
In any case, I did not anticipate what happened next - nobody noticed. Not a single one of my friends, so called, noticed that I was missing.
And then I had a vision. I had seen my future and it's not pretty. As an old man, I will die alone in my apartment to be discovered weeks later (by accident) among the filth, half-eaten by my dog. This is great. I have so much to look forward to now.
Posted by Rev. Michael Roth at Saturday, January 30, 2010 4 comments: 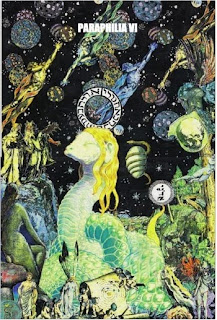 Head on over to the Paraphilia website to grab the latest edition of Paraphilia Magazine. Lots of strangeness from Jim Lopez, Christopher Nosnibor, Richard Meade, Claudia Bellocq and Chris Madoch, to name a few. Ready, Set, Mutate.
Posted by Rev. Michael Roth at Thursday, January 28, 2010 No comments:

Here's a micro-fiction piece that I've recently reworked :
One morning, Johnny brought his father’s shotgun to school for show and tell. The gun accidentally discharged, blowing off Billy's head as he sat in his desk at the front of the class. The laughter of the children quickly turned to screams of excitement or horror. This accident foreshadowed events thirty years later when he walked into his office and shot eight coworkers with a rifle. Afterwards, he sat at his desk, tidied his papers, and then shot himself in the temple with a .38 special. But this time, it was not an accident.
Posted by Rev. Michael Roth at Thursday, January 14, 2010 1 comment:

McKenna at the Psychedelic Salon

I've been grooving to a lot of Terence McKenna's talks lately, graciously provided by the Psychedelic Salon podcast. While I have some problems with McKenna's books, he really hits his stride in these lectures where the depth/breadth of his knowledge becomes apparent. (And I should add that there really is a whole mushroon load of McKenna there!) The archive also has audio files from other mind-benders, such as Timothy Leary, Robert Anton Wilson and Erik Davis.

Subscribing via iTunes is the easiest method to get the whole catalogue, although there are a number of subscription options. You can also get show notes from the website.

I've been listening to this podcast for a few years and each one is a real treat. Mutate now!

My old friend, a Doctor, of sorts, and hustler by trade had the opportunity to study the Swine Flu first hand. Here are his observations. Make of them what you will. I, myself, have no opinion. I am just happy that he is paying me in script to post his preliminary findings. In times of recession, Rx can be hard to come by and expensive.

The Swine Flu: What You Need to Know. The Old Doctor's Prescription.

The Old Doctor has a lot of patients/marks these days, so he'll give you the short version. Currently, Control Mechanisms within the humanoid population are in a panic about the swine flu. This panic seems a bit curious, given that the swine flu actually has a shorter duration and a lower mortality rate than the average flu bug. So, why the panic? Apparently, a significant part of this panic stems from the flu's apparent ability to rapidly mutate.
Well, The Old Doctor had the opportunity to experience the swine flu first-hand. Here's what he discovered. On day 2.5 of the peak flu experience, The Old Doctor woke up at 2 in the morning staring at a wall of what looked like human tissue. It was put to him that this was one visual representation of his meta-programming panel. It was further put to him that he here and now had the opportunity to reprogram or erase some deeply wired Circuit I-IV tape loops, something he proceeded to do. The Old Doctor got rid of or modified loops that were in place in him by as far back as the age of five, loops that he had never been able to dispense with even with the aid of LSD or psilocybin, loops which are very amenable with and indeed tie one into the mechanisms of Control. Ah, so that's what they really mean by mutation, and why it makes them nervous.


One of the commonly reported psychological symptoms of the swine flu is a feeling of emotional panic due to a sense of being under personal attack. If the mark, ahem, patient, deeply identifies his or her self, as many do, with robot programs locked in place by mid-adolescence, then such panic is no surprise when these programs come under potential threat. Certain aspects of Control have figured out the social threat that this virus poses and have induced this panic on a mass scale. Interestingly, most people who've actually had the swine flu can't see what the big deal is. Well, the real big deal is that it's an opportunity to reprogram oneself, one that is accessible to the entire humanoid population. It's a global brain change agent. The best damn bug experience The Old Doctor's had since he learned from the measles to time travel.
The Old Doctor's prescription? 1) GET THIS FLU. 2) FORWARD THIS TO AS MANY PEOPLE AS POSSIBLE.


Thank you for your time.

Welcome all, now move along ...

Meet the new year, same as the old year.

But no worries, as these are some fun times. In this coming year, I'll be (hopefully) updating this blog at least weekly as well as developing a few other projects on the OI website. So hope to see y'all at the freak show.