Kicking Back at the Taco de Setas

excerpt from Fever by Michael Roth and Jerry Schroeder

The girl behind him held his right arm outstretched, while the other attached the mushroom to it. Her tentacle arm wrapped around his bicep. When his veins had filled with blood, sharp roots, like tentacles from a jellyfish, appeared from the bottom of the mushroom and pierced his skin. Fever could feel a warm sensation flow through his body. He relaxed into the booth, his other arm draped over the back of the seat. He stared at the fluorescent lights in the ceiling. Their soft glow pulsated slowly. He heard laughter and talking as the restaurant became busier. The women took seats in the booth as well and the three stared at Fever as the warm circulated through his body. After a while, he could feel this mind becoming itchy.

“Is the rain falling or is the falling the rain?”

“Are you the product of a spore from space seeded billions of years ago?”

“Who is it who repeats the Mushroom's name?”

“Who is dragging your corpse about?”

“What did your face look like before your father and mother were born?”

To read more from this chapter, and other samples, please check out the website at the OI.
Posted by Rev. Michael Roth at Sunday, December 28, 2014 No comments:

More reviews past and present! This is a followup to a post last year with a couple of reviews/impressions of work I've done. Most responses waver between laughter and boredom, so it's nice when something strikes a cord with someone and they express hatred or disgust. Here we go!

“Who cares? They are just a bunch of blurry pictures.”

“Sounds like he just discovered his dick.”
This was in response to a reading I did many years ago on a local radio show. Hopefully, those tapes are lost forever. I don’t do readings anymore. For one, I think they are silly, but also, because of my stutter, they would devolve into unintentional performance art.

“You’re such a fucking square!”
I think this was directed at my personality and work in general.

The first round of reviews can be read here.
Posted by Rev. Michael Roth at Sunday, December 21, 2014 1 comment: 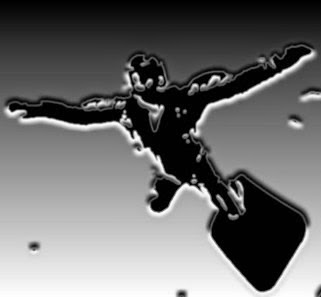 The Church does not have much time left on this physical plane. While many believe we belong to the past, we in fact belong to no-time. We are a walking suicide, exuding our (it's) own potential, able to bring our(it)self into (out of) existence at any chosen moment. We are not as talented as we once believed we were. We have no answers. We have no questions. The destruction of dreams can compel one to jump out of a plane. That was the first good idea we had.
Posted by Rev. Michael Roth at Sunday, December 14, 2014 No comments: